Coming off the election in November, stock markets thrived on the expectation that a Trump administration would reduce regulatory burdens and lower tax rates. President Trump’s first days in office brought many changes to executive policy, including his top priority of repealing and replacing the Affordable Care Act. Odds-makers presumed legislation would pass given the Republican majority in both the House and Senate.

However, due to resistance not from Democrats but from the Freedom Caucus within the Republican party, the American Health Care Act was withdrawn from consideration by House Speaker Paul Ryan after unsuccessfully rallying the necessary votes to initiate the legislation.  While the legislative uncertainty leading up to the AHCA non-vote should have created an overhang on the Health IT market,  our anecdotal read-out is that health IT purchases haven’t slowed this year given that most FY 2017 budgets were formed prior to the election, at a time when Hillary Clinton, and a general status quo within healthcare, was the basis on which budgets were formed.

A strong economy has bolstered deal activity across all markets in Q1.  Despite the uncertainty surrounding the debate between the ACA and AHCA, the volume of Q1 2017 Health IT investments continued an upward trajectory and M&A remains at healthy levels when compared to the first quarters of 2015 and 2016. In fact, we have seen investment volume increase to 118 deals in Q1-2017, over 107 investment deals in Q1-2016. 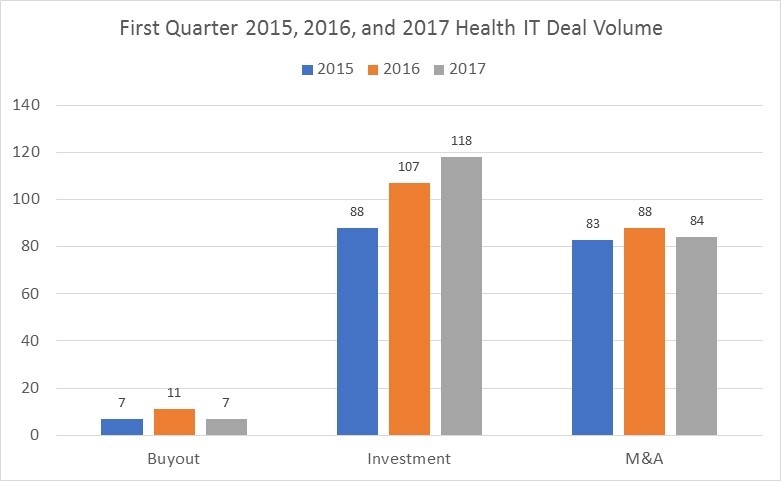 In terms of value, many M&A deals do not disclose the financial details of the transaction, making examining value trends more difficult. However, it is still important to examine the amount of capital being spent in the space as deal volume doesn’t always tell the whole picture. For this, we assume the percentage of transactions with announced financial detail remains approximately constant over time, and that those transactions are picked at random. Testing these assumptions will be a topic for a future blog. 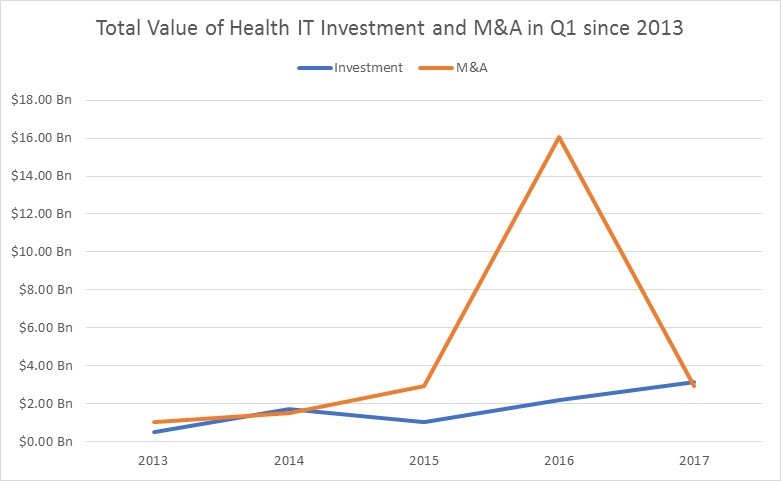 Total M&A value in Q1-2016 was extremely high, with total value returning back to the historical trend in Q1-2017. Alere, Truven Health Analytics, and Brightree all traded in Q1-2016, causing the marked bump in total value.

In all, we conclude that Q1 2017 is on track with historical growth trends over the past few years in Health IT. It appears that business continues to hum along as usual, with a slight growth in total investments in the space in line with strong investment appetite observed in the economy overall. We look forward to seeing what Q2 has in store.