The United States is the largest economy in the world and has been since 1872. With GDP of $16 trillion, the U.S. comprises over 19 percent of global GDP. Although the size of the economy rivals China, per capita GDP in the U.S. is nearly 5x that in China. The vibrant U.S. venture capital community is responsible for funding 68 percent of the world’s innovations. Nine of the world’s top 10 medical schools are located in the U.S. The U.S. is the world’s leading economic power due in large part to its technological innovation.

How can the world leader in terms of wealth, investment, innovation, and academics underperform so dramatically when it comes to healthcare? One word describes the U.S. healthcare system: inefficient. It is no surprise that the U.S. ranks #46 out of 48 in terms of efficiency – one place below Iran.

Inefficient markets typically result in a mispricing of goods and services. The cause is often due to monopolies, poor regulation, and a lack of market transparency. Each is a contributor to inefficiency in the U.S. healthcare economy, but the primary shortcoming is the lack of market transparency, or information, needed to define the cost and quality of goods and services, otherwise known as value. In many markets, information is a tool for power and a proprietary competitive advantage. However, healthcare is not like most markets. Healthcare information is unique because it serves both a humane and a commercial purpose. At stake is the health of family, friends, neighbors, and ourselves, as well as the economy and corporate profits.

The market for health information is undergoing a multi-stage evolution sparked by advancements in technology (including the establishment of both data and mobility infrastructures) and policy (including incentive programs promoting the adoption of software systems and the payment transition to value-based reimbursement). The evolution is likely to result in a decentralized and personalized care delivery model that will ultimately cater to a discretionary and informed consumer patient. 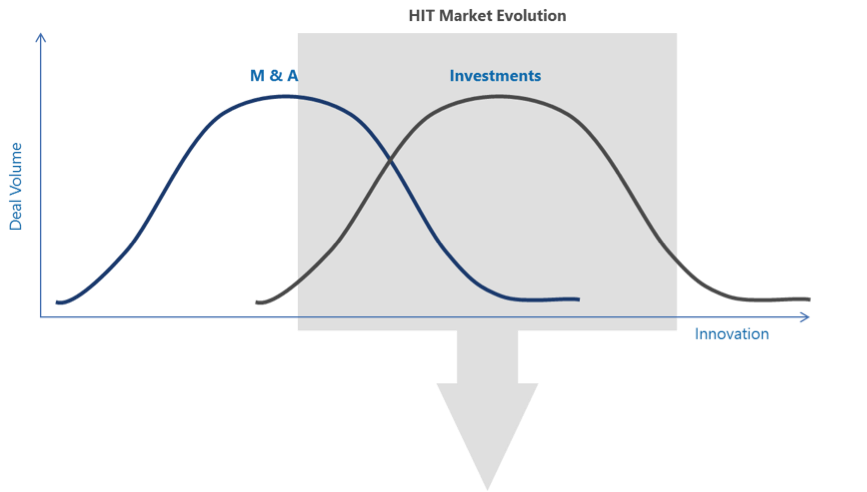 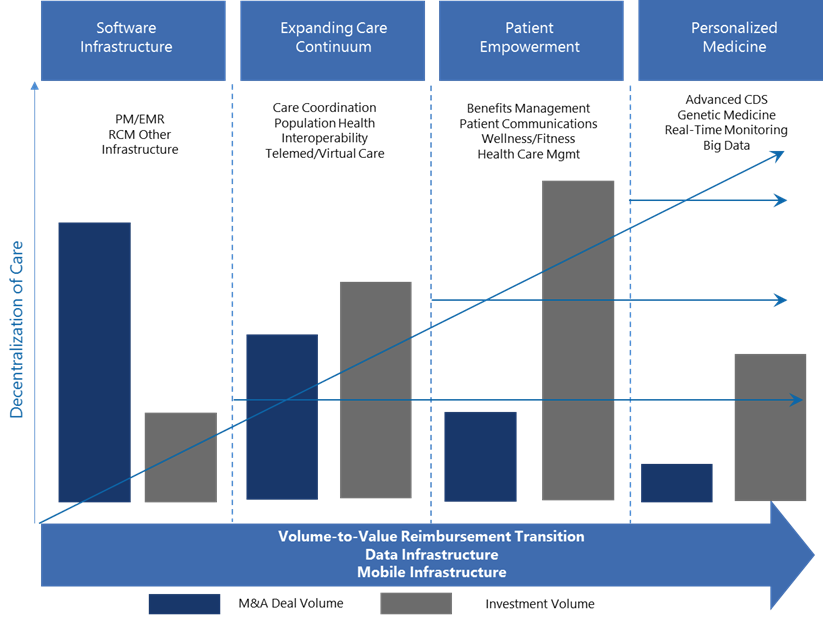 In any industry, investment activity is typically a leading indicator of innovation trends while M&A activity is typically a lagging indicator. In other words, investment usually concentrates toward the leading edge of innovation in relatively immature markets, and M&A concentrates in more proven and mature markets. The exhibits demonstrate that investment and M&A activity within health IT in 2014 reflect this thesis. As the health IT market continues to innovate and mature, HGP anticipates M&A activity will trend toward technologies that increasingly enable volume-to-value reimbursement, big data, and consumer empowerment, and investment will push further into new innovations that extend to and beyond personalized medicine.