The ground shook in December with market volatility and multiple billion-dollar transactions in the Health IT sector.  The end of the year was marked with stock swings that ultimately left major indexes down 5.6% for the Dow Industrials, 6.2% for the S&P 500, and 3.9% for the NASDAQ.  Heading into 2019, the markets are watching for both signs of a recession, which has a statistically low, but meaningful, probability of 19% in 2019 according to Blackrock, as well as the Fed’s handling of interest rates.  Investors continue to be bullish on Health IT, as healthcare is a sector that tends to perform well in a late growth cycle.  Look for more information in the coming weeks when HGP releases its bi-annual Health IT Investor Survey along with our semi-annual Health IT Market Review.

Sign up for our research at the bottom of this web page to receive our newsletters and get a notice in your inbox when our semi-annual Health IT Market Review becomes available.

Vista announces the $1.9 billion acquisition of Mindbody.  The $36.50 in cash per share represents a 68% premium to the pre-announcement price.  Mindbody operates a cloud-based business management software and payments platform for the small and medium-sized businesses in the wellness services industry. With $245mm and $300mm estimated revenue in 2018 and 2019, the valuation implies a purchase price of 7.7x and 6.3x revenue, respectively.

3M will acquire M*Modal’s physician documentation technology business for $1 billion.  The $1 billion valuation implies a 5.0x revenue and 10.0x EBITDA multiple based on next-twelve month expectations for M*Modal.  The transaction does not include M*Modal’s transcription, medical scribing and coding business which will maintain its strategic partnership with 3M.  M*Modal has a checkered history, filing for Chapter 11 bankruptcy protection in 2014 after a $1.1 billion acquisition in 2012 by One Equity Partners.

Change Healthcare announces the acquisition of the “assets” and “intellectual property” of Pokitdok.  Based on the terminology used in the deal announcement, we expect this was a disappointing outcome for the company, which raised over $50mm since 2013.

Cigna Announces Closing of $67B Purchase of Express Scripts.  Cigna calls the acquisition a “blueprint to transform the healthcare system,” indicating that the company has ambitious plans to become an even more powerful force in the health insurance and pharmacy benefit management environment.  The combination of the two entities will spur a “dramatic” acceleration of value-based care initiatives, Cigna said, supported by robust data analytics capabilities and the expanded reach of the newly created partnership.  Increased transparency and improved member engagement will be on the agenda as Cigna and Express Scripts reposition themselves as a single entity.

A federal judge in Texas rules that the Affordable Care Act is unconstitutional because Congress eliminated the penalty for people who don’t sign up for health insurance. He sided with the White House-supported lawsuit brought by 20 Republican state attorneys general, which argued that if the penalty is unconstitutional, then so is the entire ACA. The Trump administration filed a brief asking the court to overturn the ACA’s ban on preexisting conditions, opening the door for insurers to once again price coverage based on medical history. The ruling did not include an injunction, however, so nothing will change until higher courts review the ruling.

GE firms up plans to spin off its healthcare business via an IPO.  A newly public GE health care company would rank among the world’s largest.  Based on the valuation of peer companies, the new entity could have an enterprise value, which includes debt, of $65 billion to $70 billion, according to Bloomberg Intelligence analyst Karen Ubelhart.  GE Healthcare, which earned $3.5 billion last year on sales of $19 billion, specializes in equipment such as MRI scanners and mobile diagnostic machines. The company also has a fast-growing life-sciences division, which accounts for about a quarter of GE Healthcare’s sales.

A KLAS report finds that most EHR vendors are progressing well toward supporting a national patient record network now that CommonWell is connected to Carequality.  This month the ONC formalized efforts that allow provider organizations connected to either CommonWell or Carequality to freely share patient records with little to no effort.  All but two of the other major EMR vendors—athenahealth, Cerner, CPSI, eClinicalWorks, Epic, Greenway Health, MEDITECH, NextGen Healthcare, and Virence Health (formerly GE Healthcare)—have customers connecting. At this point, Allscripts and MEDHOST have yet to connect to CommonWell or Carequality. However, Allscripts has committed to connect and expects to do so next year.

For more December headlines, check out the HIStalk blog.

HGP tracks stock indices for publicly traded health IT companies within four different sectors - Health IT, Payers, Healthcare Services, and Health IT & Payer Services. The chart below summarizes the performance of these sectors compared to the S&P 500 for the month of December: 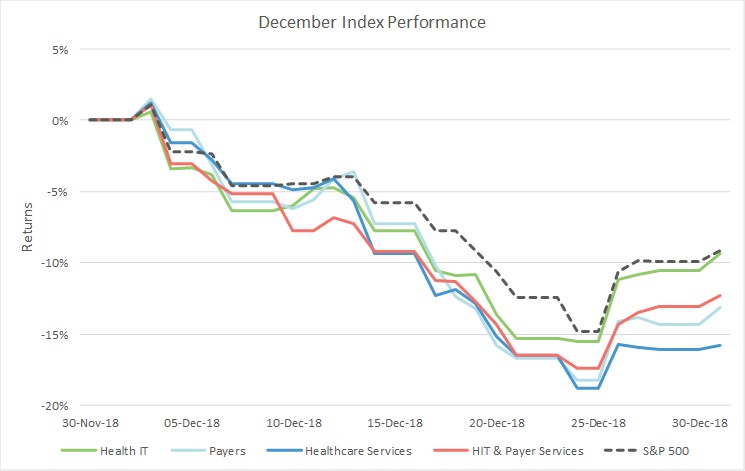 The following tables include summary statistics on the four sectors tracked by HGP as well as the S&P 500 and NASDAQ for December 2018: