EMR Consolidation – The Haves and the Have-Nots

We recognize we’re going back to the basics of Health IT with a research note on EMR transactions, but it’s hard to ignore the flurry of activity in this sector.  The number of high profile deals – AdvancedMD (Global Payments), Athenahealth (pending), PointClickCare (Dragoneer Investments), Office Practicum (Pamlico), Kinnser (Mediware), Net Health Systems (Carlyle & Level Equity), and Practice Fusion (Allscripts) on the ambulatory side, and Siemens (Cerner), Prognosis (Azalea), and Healthland (CPSI) on the inpatient side – underscore the heightened pace of transactions in the sector.  That flurry of activity is tied to very pronounced trends in the EMR market which are generally a byproduct of the dynamic relationship between hospitals and physicians.

For starters, EMR adoption has surged in the last decade to near 90% penetration across both ambulatory and hospital settings.  Pressure is mounting on physicians to support more technology and negotiate more forcefully with payers, resulting in greater alignment between physicians and the hospitals they serve.  According to a study by the non-profit Physicians Advocacy Institute and Avalere, hospitals employed 42% of physicians in July 2016, up from 25% in July 2012.  Based on the trendline, one could assume that today over 50% of physicians are employed by hospitals.  The trend toward hospital-physician employment favors large, inpatient EMR vendors who can land and expand, and as a result, Epic and Cerner have dominated the market.  According to ONC data and other independent research outfits, Epic and Cerner account for ~50% share in the Acute Care Hospital Market, mostly among larger hospitals, but with an expanding footprint in hospitals with <200-beds.  As all hospitals continue to expand their control and alignment with physicians, these large vendors have piggybacked on that trend and, as a result, almost mirror the inpatient market share in the ambulatory market.

However, don’t be fooled by the high penetration rate of EMRs – the replacement market is incredibly active.  Among hospitals with over 200-beds, the replacement battle is being won by Epic and Cerner, however replacements in smaller facilities see a much wider competitive set.  According to a report from peer60, nearly 20% of community hospitals are actively looking to replace their EMR vendor.  According to a report from Blackbook, 30% of physicians practices plan to replace their EMR by 2021, including 30% of practices with 11+ physicians.  Taken together, in the EMR market, you’re either taking share or losing it.  This dynamic results in a dichotomy between the ‘haves’ and ‘have-nots’ of vendors, and in the world of M&A, this translates to a bi-modal valuation distribution. 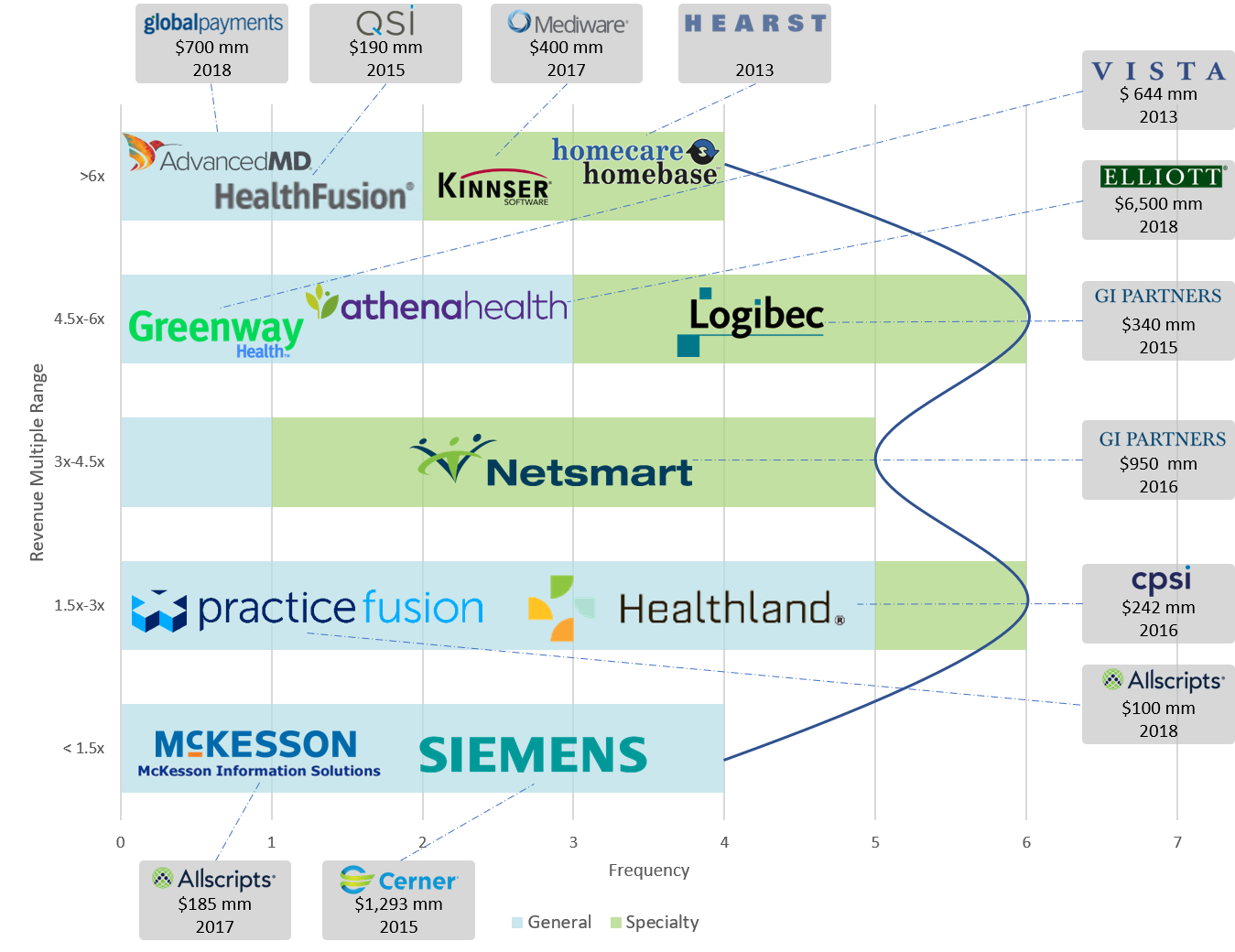 The distribution indicates that inpatient EMR vendors competing heavily with Epic and Cerner are on the losing end of consolidation, as evidenced by Healthland and Siemens.  The same is true for ambulatory EMR platforms such as McKesson Enterprise and Practice Fusion (which arguably has a decent platform, but was challenged by its disruptive business model).  The winners are specialty EMR vendors, such as Kinnser, HomecareHomebase, Logibec, and the parties to other deals that were not publicly announced such as Net Health Systems and Modernizing Medicine.  These vendors compete in specialty physician practices where they can differentiate through a specialized value proposition, and in the post-acute market where Epic and Cerner are not as strong.  Certain generalist ambulatory EMR vendors also received outsized valuations, such as AdvancedMD’s acquisition by Global Payments, which was a transformational acquisition with an investment thesis built around driving payment transactions.  In the end, the rising tide of health IT valuations does not lift all boats, and nowhere is this more evident than in the EMR market.  Value and valuation must be earned, not assumed.