In 1990, The Human Genome Project undertook the ambitious goal of mapping and sequencing the entire human genome. With over $3 billion in funding, the project took 13 years and was completed in 2003. Since then the cost of genome sequencing has fallen to a mere $1,000 and continues to decrease. Illumina, a sequencing giant based in California, declared in January 2017, “it is only a matter of time before human genome sequencing will cost as little as $100.”  Affordable genome sequencing has prompted a new generation of startups focused on cutting-edge research, innovative ways of interpreting genomic data, direct-to-consumer tests, personalized medicine, and genomic data security.

HGP undertook an analysis of investments and M&A in the genomics field in the first three quarters of 2017, focusing on genomic technologies that sit at the intersection of biopharma and informatics. Among the nearly five-hundred Health Information Technology & Services (HIT) investments HGP monitored through the third quarter of 2017, the genomic technology sector represented about 5% of the total Health IT deal volume. However, from a value perspective, investments in genomics accounted for more than 15% of the total deal value, accounting for $1,273 million of investment - $918 million went to companies in the United States and $355 million went to companies located outside the United States.

Genomic technology sits at the intersection of biopharma and informatics, and the investor community active within the space represents this multi-disciplinary mix. So far in 2017, genomic technology investors have ranged from tech- and life sciences-focused venture capital funds to strategic tech and biopharmaceutical investors, such as Amazon, Google (Verily), GE, Dell, Merck, and Celgene. The magnitude of capital flowing into these investments reflects the biotech (and regulatory) overlap that requires capital-intensive clinical studies to put the research into practice.

HGP segmented the transactions into four categories that are differentiated by target customer: Consumer (individual customers), Drug Discovery (biopharma customers), Clinical Research (academic and research customers), and Clinical Decision Support (clinical provider customers).  Investment in personalized medicine has seen an upturn because of the identification of genetic background as a potential cause of differential effects of treatment. This finding is co-aligned with the frequent investments that we have seen in both clinical research and clinical decision support. Genomic analysis has revolutionized cancer treatment and cancer detection and continues to play an increasingly vital role in personalized medicine through clinical decision support.

While our data is focused on technology companies serving various facets of the genomics market, there is also a growing category of genomic sciences companies that are leveraging technology in a meaningful way. GRAIL, a life sciences company whose mission is to detect cancer earlier through high-throughput sequencing of blood tests supported by a strong technology infrastructure, secured over $970 million in funding led by ARCH Venture Partners and Johnson & Johnson Innovation this year. Amazon also joined the Series B, highlighting the powerful convergence between life sciences and technology.

Along with investment in the clinical space, genomic technology has experienced a huge boom in the direct-to-consumer kit market. With the advancement of genetic analytics and easy to use kits, individuals are now able to determine their ancestral backgrounds and potential disease risks based on their genetic profiles from a simple mouth-swab – and investors are taking notice of this new market opportunity. An example is the $250 million investment in 23andMe led by Sequoia Capital, which has succeeded due to demand for its data from biopharma despite the FDA initially banning direct-to-consumer genetic tests for diagnosing disease risks.

One of the foreign investments that also attracted our attention was a $240 million investment in the largest genetic database outfit, WuXi NextCODE in China, which aims to incorporate big data analytics into genome sequencing and personalized medicine. With fresh funding, they are creating “gold standards” for a genome-sequence database that will be globally available across different industrial sectors.

The following are prominent deals across genomic technology sub-sectors in the last three quarters. 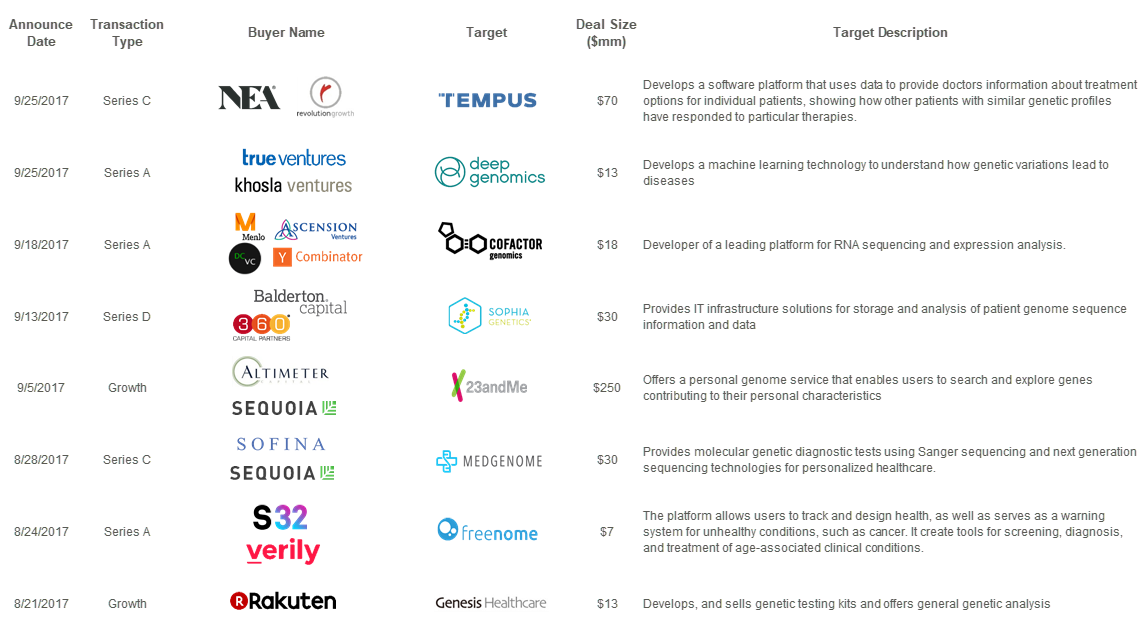 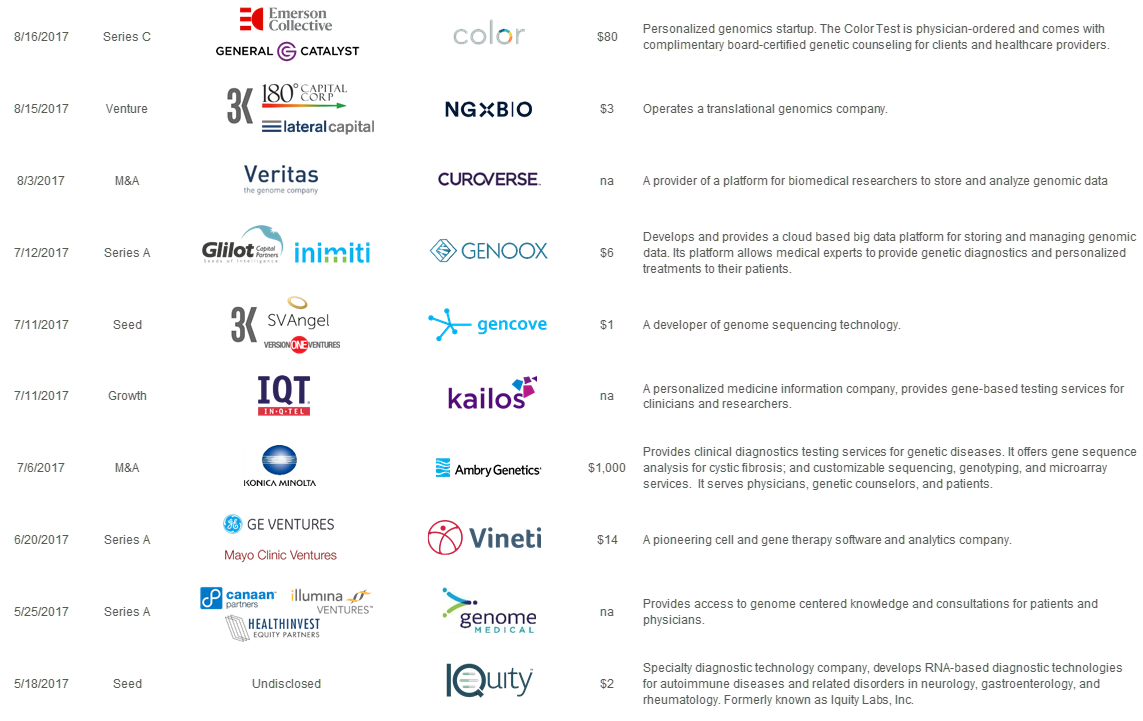 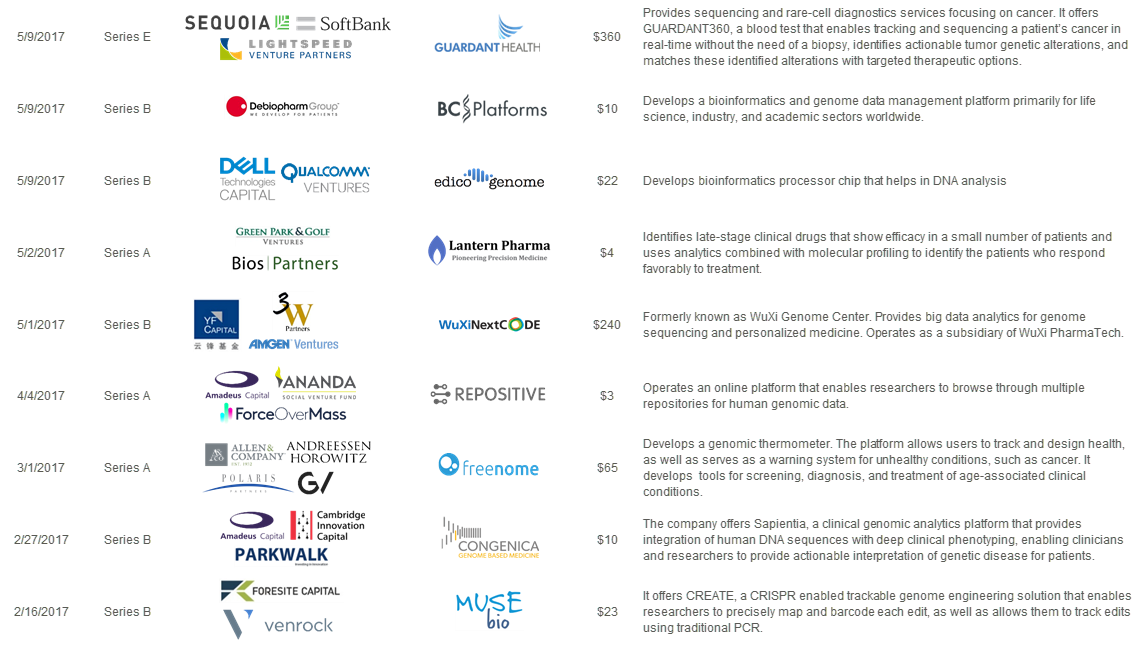